John Legend Becomes The First Black Man And Youngest Person To Win An Emmy, Grammy, Oscar And A Tony Award

After accepting an Emmy Sunday night for his role as a producer on the live musical Jesus Christ Superstar Live in Concert, which won the Outstanding Variety Special (Live) award, John Legend became the first black man to collect an EGOT. 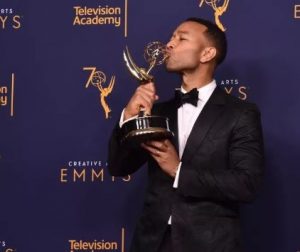 An EGOT winner is someone who has bagged an Emmy, a Grammy, Oscar and Tony award. The first black entertainer to win an EGOT was Whoopi Goldberg, an honor she secured in 2002.

With this, John Legend becomes the 15th entertainer in history to collect all four statues and the youngest too, at the age of 39. The singer, composer and producer won his first Grammy in 2005, including Best New Artist. Meaning it took him just 13 years to win an Oscar, a Tony and an Emmy, each of which are considered lifetime achievements in their own right.

His wife Chrissy Teigen, celebrated his win with a photo of him alongside two other new EGOT winners and co-producers for Jesus Christ Superstar Andrew Lloyd Weber and Tim Rice.

“85% Of Mad People In Nigeria Are Youths”