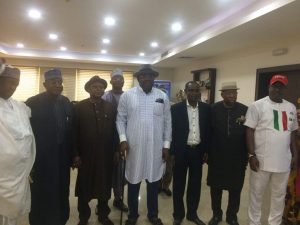 Former President Goodluck Ebele Jonathan has expressed utmost confidence in the ability of a frontline PDP presidential aspirant, Kabiru Tanimu Turaki, SAN, to perform creditably if given the chance by Providence to be the country’s president in 2019.

The former president was speaking in his office in Yenagoa, Bayelsa State this weekend when Turaki who was visiting his 36th state, led his campaign team to brief the former leader on his nationwide consultations with PDP governors, state working committees and other leaders as well as delegates ahead of the party’s presidential primary.

“We are looking beyond education,” he said, noting that “whenever your name (Turaki’s) comes up, there had been no doubts created about you on any of the criteria unlike in some others.”

In what could be termed as a testimonial on Turaki who served as Minister of Special Duties and Intergovernmental Affairs and also as Supervising Minister of Labour and Productivity under him, the former president said that the visit provided an opportunity to thank Turaki for supporting him with qualitative performance while in office.

Dr. Jonathan enjoined those seeking leadership positions to endeavour to make sacrifices for the wellbeing of future generations.

Governor Seriake Dickson had earlier at a meeting with the campaign team at the Government House council chambers did what he said he had never done by calling for a standing ovation for Turaki who, the governor described as “the foremost presidential aspirant, a good Nigerian and a great Bayelsan.”

The governor said: “All have seen and heard you (referring to members of the state house of assembly and the cabinet in attendance),” adding: ” there is no doubt in their minds as to your comparative suitability for the job (of president).

“The country needs a leader with vision, competence, capacity and who is digital, detribalized and a bridge builder,” the governor added.

He said further: “We are tired of a riotous Nigeria. We say NO to those who limit the Nigerian Dream by way of religion, ethnic, state or regional enclave.”

Governor Dickson also pointed out that the the 2019 presidential election will be a referendum on restructuring.

Turaki who had enumerated his priority agenda as including the tackling of security challenges; revitalizing the economy and creating enabling environment for employment generation; fighting corruption and promoting the rule of law stressed that he will “ensure that Nigeria is restructured to enthrone justice, equity and fairness.”

He stressed further that he has the vision, knowledge, capacity and competence to provide the critical and strategic thinking necessary for addressing Nigeria’s multifarious problems. “I stand before you as the best of the best (of all the aspirants),” Turaki said.

During Turaki’s interaction with the delegates, the chairman, Bayelsa State PDP, Hon. Moses Cleopas assured the aspirant that they were convinced about his promises.

“There is no shaking for you … Among those we have interacted or interfaced with, I believe that you are the most brilliant,” the chairman assured Turaki.

‘I Broke No Law By Dodging NYSC’ – Minister Of Communication, Adebayo Shittu