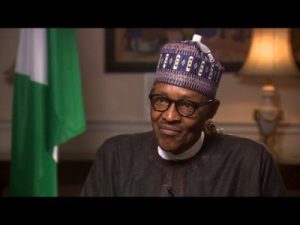 Abubakar, who is Buhari’s main opponent in 2019, visited Obasanjo on Thursday afternoon alongside some clerics and top members of the Peoples Democratic Party (PDP).

Obasanjo had said though he was not on the same page with Abubakar over some undisclosed reasons, he had forgiven him based on the apology tendered by his former deputy.

The elder statesman said the race to dislodge Buhari from Aso Rock is tough, Abubakar is a better leader than the incumbent president.

But speaking through Garba Shehu, his spokesman, Buhari vowed not to be distracted by the alliance of of his opponents.

“The Presidency has received the news of former President Olusegun Obasanjo’s predictable U-turn and somersault on the endorsement of the PDP candidate, Atiku Abubakar, at a meeting Thursday, and to say that we are the least surprised by the well-rehearsed theatre,” the statement read.

“They will lose together. Listening to the prepared statement of the former President after the meeting showed the usual ego trip and “I know it all” character of Chief Obasanjo.

“In the first place, we dare to say that a pompous statement from the former President advising Nigerians on a vote against President Buhari is the best recommendation that can come at this time. It also betrayed a lack of understanding of today’s politics which is about good governance.

“The country voted for change in 2015 and a leader that ensures good governance which only President Buhari and the APC can provide. Bent on these laudable goals, we will not allow ourselves to be distracted.

“We are busy on various national issues including the restructuring and the diversification of the economy, fighting corruption, terrorism and other threats to national security; increasing the availability of electric power, improving education, health, and providing long-delayed infrastructure – roads, rail, airports and so forth.

“Many governments have come and gone, but they did not care about some of these projects. We were talking about these things for sixteen years under the PDP and nothing was done.

“Nigerians trust President Buhari in this effort because they are convinced he is not in government for personal financial benefits, or for an ego trip. It is just eleven years ago that the former President and Vice President in their ugly fight for power accused each other of corruption. Nigerians are yet to forget all that.” (The Cable)