The Inspector-General of Police ( I-G) Ibrahim Idris has put the figure of policemen in Nigeria at about 334, 000.

Represented by Commisioner of Police Olusegun Odumosu of the Inspectorate Department at the Force Headquarters, the IG said in spite of the challenges confronting the force, it had evolved modern strategies, principles and modules to keep up with security demands. 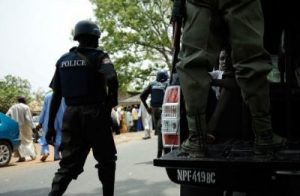 He noted that kidnapping remained one of the most disturbing crimes plaguing the Nigerian society, adding that schools had been repeatedly targeted by kidnappers.

Idris attributed kidnappings to settlement of political conflicts bordering on struggle for power.

He said that it was a collective responsibility of all Nigerians to facilitate a holistic security approach to reverse the disturbing trend.

“In view of the need to make our schools safe, especially in the task of providing and enabling and conducive learning environment for the students,”he said.

He called for a 24-hour security protection in addition to round the clock surveillance activities and motorised patrol of the school vicinity.

The I-G also called for the introduction of community policing strategy, adding that it would reduce cases of kidnapping.

He noted that it was the responsibility of all stakeholders in the education and security sectors to continue to work hand in hand.

Idris said that with the increased in funding for the police by the Federal Government, the force would be better postponed to discharge its duties effectively.

He commended the organisers of the conference, Safe School Academy International, a Non-Governmental organisation (NGO) over the initiative.

The News Agency of Nigeria (NAN) reports that other organisers are: Exam Ethics Marshals International and Ethics Resources Centre Nigeria.

The conference was also attended by representatives of the Nigeria Security and Civil Defence Corps (NSCD), the military, Fire Service and school proprietors among others.