According to oil magnate/ politician, the renown playwright was seated on a wrong seat in a plane. A young man then approached him that he sat on his allotted seat, and asked him to vacate it. Appeals to let the 84 year old literary giant have the seat allegedly fell on deaf ears.

Woke Soyinka according to the story however quietly vacated the young man’s seat. The story shared  on Tonye Cole’s Instagram page on Sunday has however led to a wide spread social media debate. Some are of the view that the young man was disrespectful, while many others think it was ok to ask for the young man to ask for his alloted seat.

@tonyepatrickcole
・・・
@professorwolesoyinka #celebrategreatness #relationshipsmatter met one of the greatest Nigerians walking the earth today and as with other times, he was genteel, witty, forthright and humble. My smile gives me away as he permitted the picture whereas he would have preferred to get back to his newspapers. Then we boarded the flight and after assisting him with his bags, he took the window seat and promptly started reading again.
A few minutes later this young man, baseball cap, t-shirt to show his muscled chest and tattooed biceps boards the plane and tells Prof he is on his seat (which he was). Those of us including the cabin crew tried to reason with Bobo Fine to let the old man be but the chap refused. He insisted Prof should vacate his window seat, which the old man quietly did for his original aisle seat next to him.
I couldn’t understand how we got to this point where we no longer have respect for elders, even if are so ignorant of the great global personalities in our midst. Is it too much to ask that an elderly man be allowed to remain in a seat allotted to you in the same business class cabin and the same row?
Na wa o!

YouTuber Dimma has an interesting take on the matter, read below: 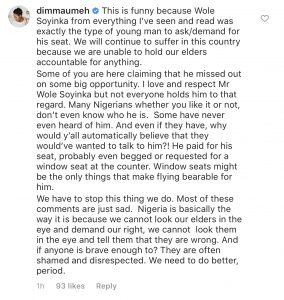 Wole Soyinka was the kind of young man to ask for his seat.

I really think Wole Soyinka might just have been cheekily hoping the person in the seat wouldn’t turn up. The caption says he quietly moved. The problem is the Tony guy who posted it. Embarrassing.

Any diligent reader of Wole Soyinka will know that he would have insisted on his seat as a young man.

Yes, our culture demands respect for elders. But undue entitlement by senior citizens, especially when the premise is wrong, should always be resisted. That's why we are here.

A young Wole Soyinka would have probably done the same by "rightfully" claiming what is his. 🙂… We attach "too" much home training to some issues we shouldn't.

This Wole Soyinka story is a battle of culture and civilization! Both are right, depends on which sides you on 🤷‍♂️

This Wole Soyinka issue boils down to the Nigerian Mentality that Elders can do no wrong, can get away with anything because they are old. Imagine being tagged "Disrespectful" because you as a young person want to sit on your seat. God Safe Us 🤦‍♂️🤦‍♂️

It's funny how most people don't see anything wrong with how the "T-shirt guy with tatoos" insisted on Wole Soyinka vacating his seat. It shows how damaged our moral value system has become.

On this Wole Soyinka plane seat issue, my take is simple.

Is that enough reason to disrespect them, Hell No.

Is asking an elderly to leave your allocated seat disrespectful, even after being prevailed by others, YES!!!

While I think Wole Soyinka from all I've read about him is the type of person who would have asked for his seat, I would never ask him to vacate a seat for me, regardless if he is Wole Soyinka or another unknown elderly person. I would rather seat in the next available seat.

Do leave your comments.

Femi Kuti, Others To Perform At AFCON 2019