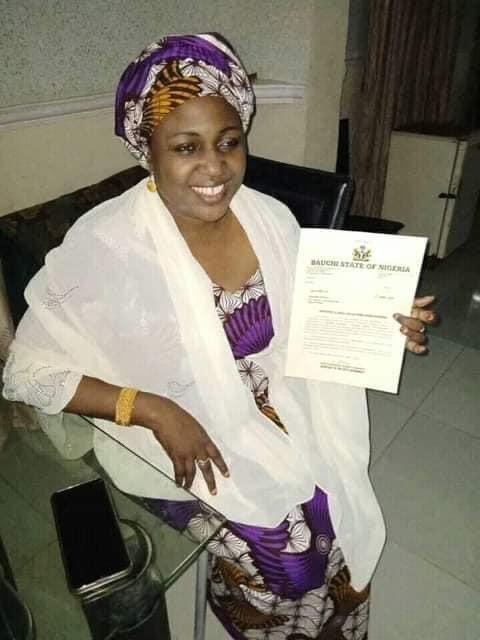 This is according to a letter dated August 4, 2020, with reference number GO/SS/POL/S/83 and signed by the Secretary to the State Government, Mohammed Baba.

I am pleased to convey the approval of his Excellency Sen Bala Abdulkadir Mohammed CON, the Governor of Bauchi State, for your appointment as Special Assistant, Women Affairs (Unmarried).

The appointment is based on your knowledge, experience and personal qualities of hard work, honesty and absolute loyalty. I would expect you to utilise all these qualities in facing the challenges of your office to facilitate the attainment of our collective goal and the expectation of our electorate. The terms and conditions of your appointment as enunciated in the regular government policies as applicable. 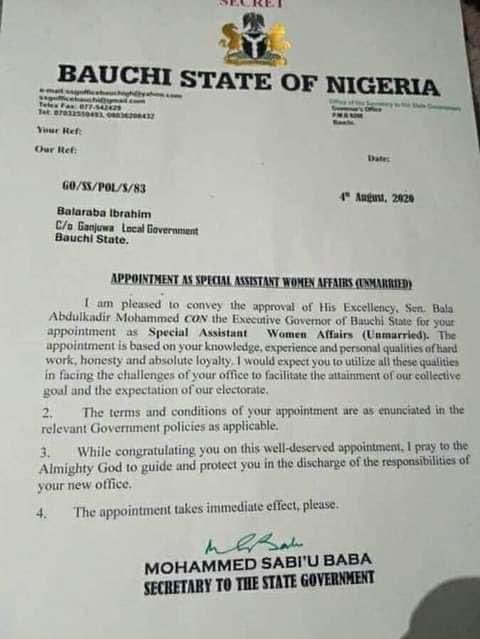 The new appointee, Ibrahim is also the Chairperson, Association of Divorcees in Bauchi State.

Last year, she set up counselling centres for intending couples across the state in an effort to address challenges leading to broken homes.

She told the News Agency of Nigeria that the centres would be established in partnership with Muslim and Christian clerics to prepare the minds of intending couples.

According to her, the increase in the number of young divorced ladies is becoming worrisome and constitutes a menace to the society.

We conducted a survey three months ago across the 20 local government areas of Bauchi State. According to the indicators, major causes of separation and divorce were lack of empowerment skills, unemployment, poverty and early marriage among spouses.

She also noted that some husbands were not discharging their marital responsibilities which, she said, included proper feeding, clothing and shelter of their spouses.

Some of the divorcees we interviewed during our survey three months ago said that their husbands were not providing their basic needs. Some of them, as young as 20 years, were married off at the age of 15, while others had divorced more than 10 years ago. While men are not even available for marriage, those that were married could not take care of their matrimonial responsibilities.

She stated that her office will partner with clerics from both religions to embark on counselling before marriage to prepare their minds for marital life.

Bauchi Govt To Conduct Census On Sex Workers In The State