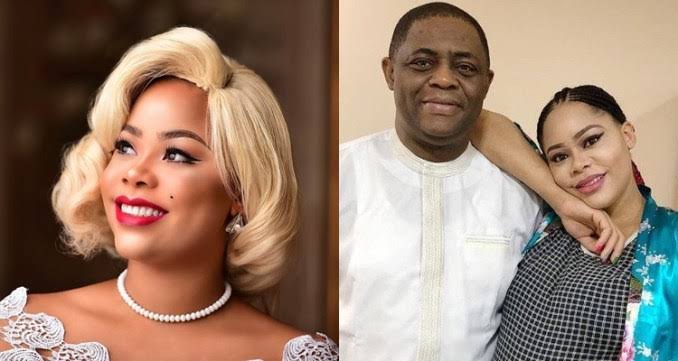 Precious Chikwendu, estranged wife of former Aviation Minister, Femi Fani-Kayode has broken her silence since news of about her separation from her husband became public.

Precious, 31, married Fani-Kayode, 59, in 2014. The marriage is blessed with four children, including a set of triplets.

The former Minister of aviation and his wife reportedly parted ways allegedly over reasons yet to be confirmed.

The former Miss United Nations quoted Psalm 126 Verse 1-3 of the Bible, which reads,

According to many, the Bible verse quoted is in reference to her separation from her husband.

Some publication reported that the marriage broke over physical abuse by Fani-Kayode on his wife, which has been denied by some family sources.

Fani-Kayode has also threatened to sue Stella Dimoko Korkus, a blogger, over a report on the latter’s platform alleging domestic violence against his wife.

Stella’s blog claimed Chikwendu moved out without her sons and that the ex-minister took over the kids, put them under the care of a nanny, and forbade his estranged wife from coming near their house.

The report also alleged that the triplet sons of the minister may not have been fathered by him as they were conceived through IVF and Precious had demanded a DNA test.

The minister’s lawyers have also demanded that the blogger enters into negotiation with Fani-Kayode for N2 billion as a token for their patience while publishing an apology in two national dallies within 14 days.

Meanwhile, Femi Fani-Kayode’s separation from wife would serve as his fourth broken marriage, with others before having collapsed for certain reasons.

His first wife was Saratu Attah, daughter of former Kwara governor, Adamu Attah. They got married when he was 22. The marriage lasted between 1987 and 1990. They had a daughter together.

Next was his marriage in 1991 to Yemisi Olasunbo Adeniji. She is now known as Yemisi Wada after remarrying. They got married immediately she finished at the Law School.

The marriage collapsed after three years, with Yemisi already pregnant with the their third child.

The third marriage was to Regina-Hanson Amonoo. They were married in 1997 and have one daughter.

‘I Never Abused Her, I Caught Her In Bed With Married…

‘You Have Always Been Kind, Loyal’ – FFK Showers…