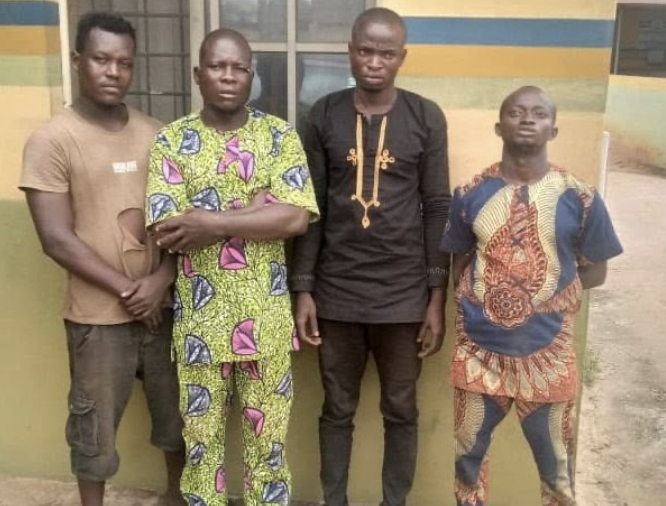 Four men have been arrested by officers of Ogun Police Command for allegedly beating a police constable, Agada Akoh to death at Dalemo, in Sango Ota area of the state on September 13, 2020.

In a statement released on Monday, September 14, the spokesperson of the state police command, DSP Abimbola Oyeyemi, identified the suspects as Jelili Ismaila, 22; Amidu Bankole, 34; Elijah Samson, 36; and Moses Proboye, 34.

They were reportedly hired by a truck driver who had an argument with the deceased police officer and his colleague.

Oyeyemi said the deceased constable and one other were escorting their principal from Idah in Kogi State to Lagos State when the incident happened.

Preliminary investigation revealed that the deceased officer and one other escorted their principal from Idah in Kogi State to Lagos State. On their way passing through Sango Ota, a truck driver, Jelili Ismaila, drove dangerously and almost pushed their vehicle off the road.

While trying not to hit the vehicle conveying the officers, the truck entered a pothole as a result of which its tyre got punctured.

This made the two policemen to come down and caution the truck driver to always be mindful of other road users. But the driver accused them of being at fault, thereby mobilizing hoodlums who attacked the officers and their principal with weapons and beat the deceased to a coma.

Having realised that the policeman may not survive the attack, the driver and his hired hoodlums took to their heels. But luck ran out on four of them when the DPO and his men on a tip-off stormed their hideout and got them arrested, while four others escaped.

The body of the deceased officer have been deposited at the Ota General Hospital mortuary.

Ogun Commissioner of Police, CP Edward Awolowo Ajogun, who described the incident as barbaric and act of lawlessness has ordered a massive manhunt for the remaining suspects.

He also warned that unwarranted attack on his men is unacceptable and will not be tolerated.

The CP therefore directed that the arrested suspects be transferred to the homicide section of the state criminal investigation and intelligence department for an in-depth  investigation and diligent prosecution.

‘Borrowing, Accumulating Debt For Next Generation Is Criminal’ – Obasanjo