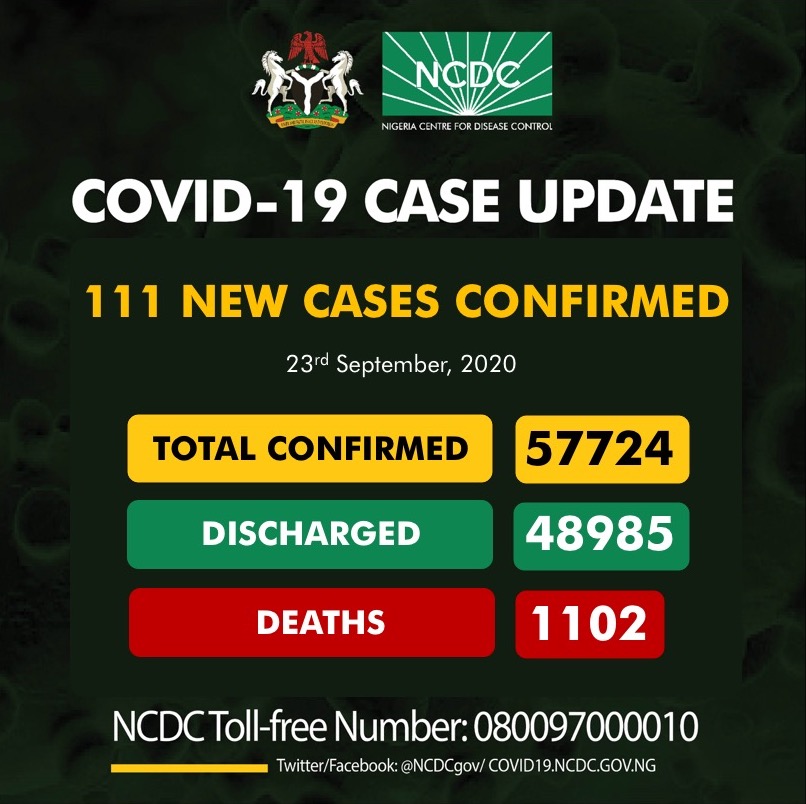 Nigeria Centre for Disease Control (NCDC) has announced 111 new cases of the coronavirus infection in the country.

NCDC made this known on its official twitter handle on Wednesday.

According to the agency, the new infection takes the total number of confirmed cases in the country from 57,613 to 57,724.

NCDC said that the new cases were reported from 12 states of the federation.

Also, overall samples tested nationwide, according to NCDC‘s September 22 situation report, have increased from 484,051 to 487,786.

In other news, the health agency has said that a multi-sectoral national emergency operations centre (EOC), activated at Level 3, have continued to coordinate the national response activities across the country.

It added that the drivers of COVID-19 were different across the country, therefore subnational understanding of transmission was critical.

We can’t celebrate decline in national figures until we test sufficient numbers in every state.

It added that the most common signs and symptoms reported by COVID-19 patients in Nigeria were cough and fever.

The agency said that in addition, most patients who died were reported to have difficulty in breathing.

NCDC noted most people who died were 61-70 years of age, stressing that a properly worn face mask acts as a protective barrier to prevent the spread of COVID-19.

Wear a mask properly covering your nose and mouth, no gaps secured with straps.

Remember, a face mask is a personal item and must not be shared.