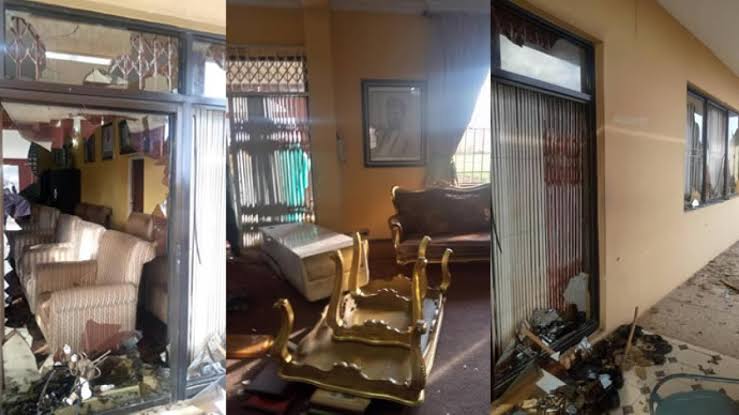 Lagos titled chiefs have condemned the attack on the palace of the Oba of Lagos, Rilwan Akiolu, and stealing of his traditional staff.

They made this known in a statement titled, ‘Lagos titled chiefs frown at the desecration of the Lagos traditional institution’, on Thursday.

The statement was signed by Chief Olawumi Gasper, Aare Onimo of Lagos state, and the General Secretary of the Association of Lagos Titled Chiefs, a non-political association of honorary chiefs and prominent members of the Lagos Community.

Thugs on Wednesday stormed the Palace of the Oba of Lagos located at Iga Idugaran, Lagos Island, vandalising vehicles and carting away several artefacts including Staff of office.

While frowning at the attack on Akiolu’s palace, the chiefs described the carting away of his instrument of office as a taboo and a desecration of the traditional institution of Lagos.

This development no doubt posed grave dangers to the culture and traditions of the good people of Lagos.

The action is unacceptable as the highly revered and age-long traditional institution of Lagos will not be compromised and must be preserved. The tradition and culture of the people of Lagos have been with its people for centuries and therefore a taboo for instruments of office(traditional staff) or any of its replica to be carted away from the palace. No less important are other traditional artifacts taken away by these miscreants.

The Oba is not only a King but the spiritual head of the people, the traditional authority also has an aristocratic flair commanding respect and obedience. The King is the custodian of the history, traditions, and culture whose words and actions are sacred and therefore the invasion and looting of the palace by miscreants and hoodlums, carting away of the staff of office and other items of value, desecration of the age-long customs of the people of Lagos was highly condemned by the Association.

It is an aberration which must not be allowed to repeat itself. The Titled Chiefs condemned the effrontery of the invaders and pledged its unwavering commitment to the sanctity of the Lagos Monarchy, its traditions and culture.

While pledging their support and allegiance to the Oba of Lagos, they called on relevant law enforcement agencies to “fish out the perpetrators of this act and appropriate consequences effected.”

Watch some videos of the vandalism below;

People broke into the Oba of Lagos palace to swim & cool off after protesting 🤣 #endsarspic.twitter.com/Rh9S93Ll9W

Staff of office of Oba of Lagos seized.#LekkiProtest #EndSARS pic.twitter.com/4TIQ33xXoQ

They saw stacks of Dollars in a coffin in the Oba of Lagos’ Palace. pic.twitter.com/zRwMRd27Xw

The Oba of Lagos will need a new throne pic.twitter.com/XqOCh7Qwpk

Full Speech: ‘Your Voices Have Been Heard, We Are Responding’ – Buhari Says As He Calls For An End To #EndSARS Protest