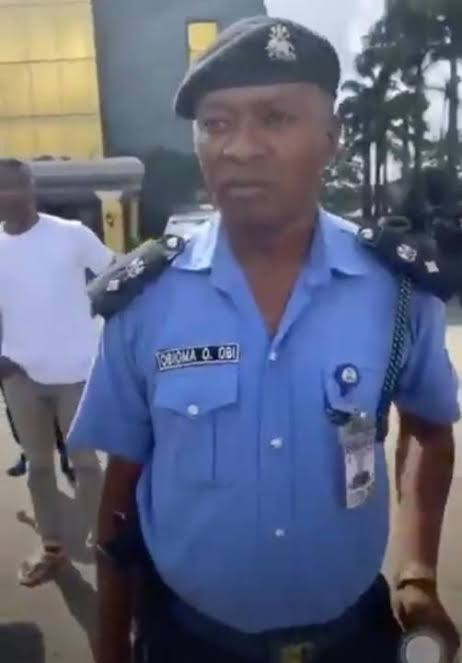 A discplinary action has commenced against a policeman identified as Obioma O. Obi who was seen in a viral video assaulting #EndSARS protesters in Imo state.

This was confirmed by Imo police commissioner, Isaac O. Akinmoyede in a statement released by the state’s police spokesperson, Ikeokwu Godson Orlando on Thursday evening, October 8.

Many Nigerians in different states across the country participated in protests against Special Anti-Robbery Squad (SARS) of Nigerian Police.

The protest was peaceful in some states while in other states security operatives were directed to disperse protesters, which resulted into some form of violence.

Akinmoyede has now condemned the unprofessional conduct by the police officer who attempted to slap a protester and pulled a gun on other citizens at the protest venue.

He said the conduct displayed by the officer is not a true reflection of the ethics, standards, values and training of the Nigeria Police Force.

The police commissioner noted that it is within the rights of the citizens to express their concerns through protest and other legitimate means.

The Commissioner of Police, Imo state, CP Isaac O. Akinmoyede, psc, fdc, MNIM, has condemned the unprofessional conduct by a police officer, captured in a trending video, attempting to assault some protesting citizens against alleged human rights violations by personnel of the Special Anti-Robbery Squad (SARS) in Imo State, today, 8th October, 2020. The CP notes that the conduct displayed by the officer is not a true reflection of the ethics, standards, values and training of the Nigeria Police Force.

The CP, while noting that disciplinary action has already commenced against the erring officer, however observes that much as it is within the rights of the citizens to express their concerns through protest and other legitimate means, they should do so in a peaceful manner, devoid of violence and disruption of public peace and order.

The CP calls on the people of Imo State to exercise restraint and be patient with the ongoing reforms on SARS and other Tactical Squads of the Force. He reassures that the Command will fully comply with the directives of the IGP towards preventing any violation of the rights of the citizen and improving on the working relationship between the Command and residents of the State.

Obioma O. Obi is the force behind the killing of innocent youths in Nigeria and he must be jobless by the end of the month in Jesus name#EndSARSProtest #ASUU #thirdmainlandbridge #asuustrike #ThursdayMotivation Tacha Falz #EndSarsProtests #LayconOnYouTube pic.twitter.com/yl4B63XtGt