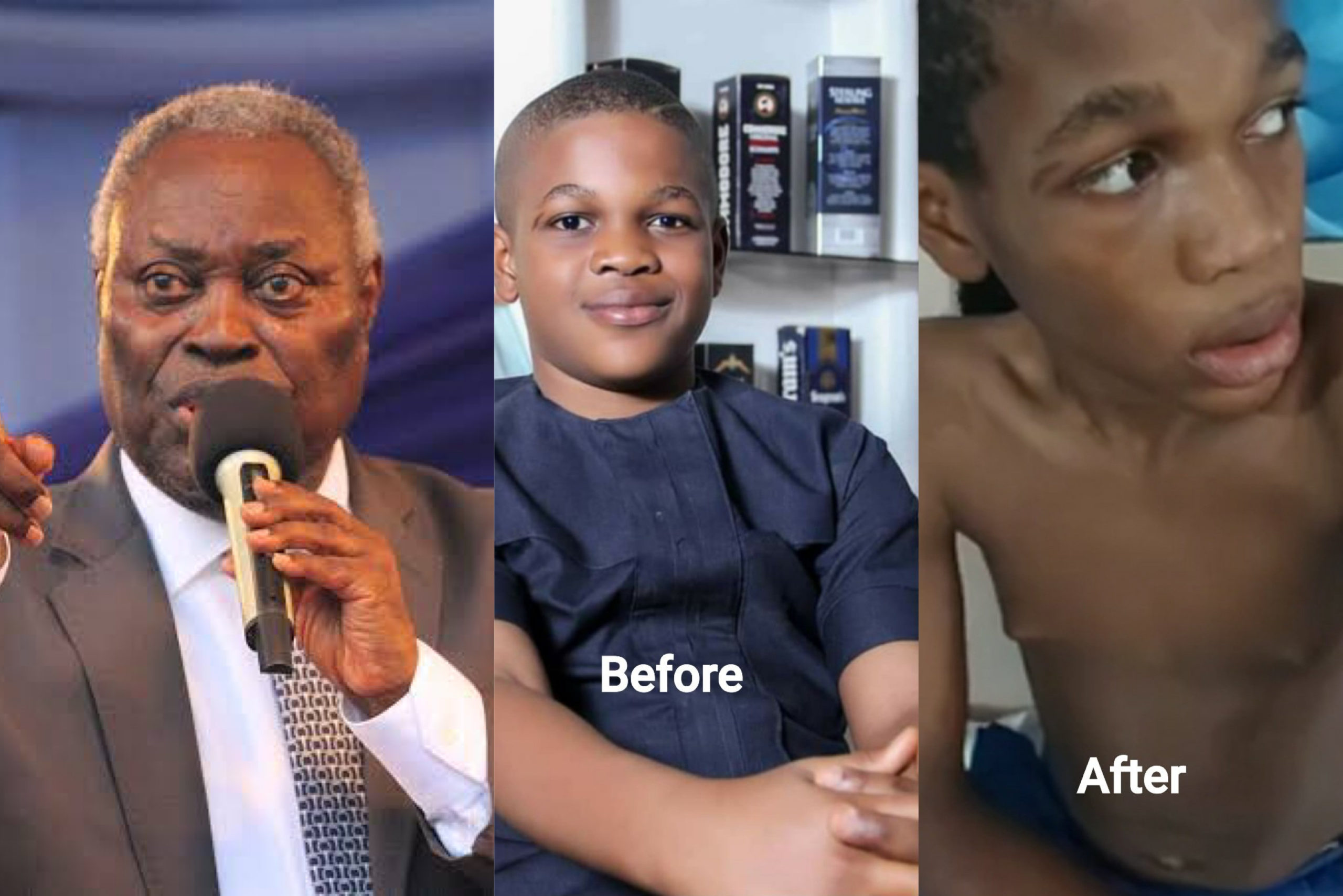 Nigerians have called out Pastor Williams Kumuyi, founder of Deeper Christian Life Ministry, for keeping mum about the alleged sexual and physical assault of a student at Deeper Life High School.

In a viral video on Facebook, Deborah Okezie, mother of the student, Don Davis cried out to Nigerians, pleading for help to get justice for her son who had been molested by his senior students and starved consistently at Uyo Campus of the school, despite the full payment of fees.

According to information obtained from the video, Don Davis’ mother had gone to pick him up on Friday from the school and was the last person to pick up her child there.

However, she noticed that he was sick and had not been attended to. The woman also alleged that she noticed her son was not able to sit properly, which prompted her to check his buttocks.

From the look of his anus, Deborah said her son had been sexually molested.  This was later confirmed by doctors at the hospital where Don Davis was taken. The young boy claimed that his seniors in the school inserted their fingers into his anus.

Reacting to this, Akwa Ibom State Governor, Udom Emmanuel, mandated Commissioner for Education, Dr Enobong Mboho, to commence investigation into the alleged case of child abuse at the school.

Also, Deeper Life High School management stated that the alleged happenings were not tolerated in the institution and investigation was ongoing.

In another Facebook Live session last Tuesday, Okezie quashed such claims that she is trying to tarnish the image of the church, explaining that her actions were aimed at getting justice for her son.

The mother said she is someone who reports cases of injustice on her Facebook page, adding that it is wrong for people to criticise her for her recent outburst.

On his part, Iniobong Archibong, father of Don Davis, revealed that the school authorities told the family to withdraw the case to cover up the assault.

Speaking with newsmen, Archibong stated that the state Superintendent of the Church, Deeper Life Christian Ministry, had visited the hospital where the boy was being attended to alongside the principal of the school, Ndidi Solomon; chairman of the school’s medical forum and another prominent member of the school board.

In a new video, she expressed that he experiences nightmares and regularly jumps up from sleep suddenly.

Earlier, the mum who is seeking justice for her son, gave an initial update, claiming she was intimidated after she was summoned by the Commissioner for Education for further investigation.

She said her phone was seized and she was confronted for going live on Facebook to give an update about her son.

Okezie cried out and said if anything happens to her, she wants Nigerians to know who to hold responsible.

Reacting to this, many Nigerians are now asking that Don Davis gets justice and have called out Pastor Kumuyi for keeping quiet about the alleged incident.

Pastor kumuyi is too quiet for someone who sternly preaches against immorality and wickedness.

What has Pastor Kumuyi said about this issue?? His voice is too low for someone who screams about immorality…Davis was abused and raped by horrible boys, Davis is one out of the victims in that school!! #JusticeForDonDavis

It has become a norm for people to go to boarding school to come back slim than how they went but this one particular case is worse. He came back with slim fitted body from head to toe. Pastor Kumuyi should kindly lend a voice to this.#JusticeForDonDavis #deeperlifehighschool pic.twitter.com/pfbjtmG9TU

For someone who preaches against wickedness and immorality, Pastor Kumuyi has been too calm on this case.

Sir, speak up and help speed up the ‘investigation’ if there’s any indeed

This matter shouldn’t be neglected, it should be looked into, the boy’s psychological and mental health is affected and if he doesn’t get a sense of Justice he might remain like that for a long time or even forever. Pastor Kumuyi please look into this #JusticeForDonDavis pic.twitter.com/0RWKo3pkwJ

Sexual molestation is a great offence.
Pastor Kumuyi shouldn’t be silent on this, the entire sch management shud be arrested n questioned for this act of negligence 😭#JusticeForDonDavis pic.twitter.com/oOCPmMZ6AY

Pastor Kumuyi’s silence in this #JusticeForDonDavis case reminds me a lot about Buhari stans on pressing issues. I think it’s a national problem, our leaders sees no point in addressing their people when things are going Bad. They just keep mute till the problem goes away.

Pastor Kumuyi Sternly Preaches against Lies, Evil & Wickedness, why is the Deeper Life School in Akwa Ibom oppressing a 12 year old student & the Family? These are the times to practice all they preach & bring the offenders to book. #JusticeForDonDavis

Pastor Kumuyi you just have to interfere and do the needful,this pushed me to tears,why will an 11years old boy be raped in boarding school,deeper life high school and nothing has been done..please tweet and retweet and trend #JusticeForDonDavis

Pastor kumuyi should do something quickly to this. He was sent to school, not a den.#deeperlifehighschool pic.twitter.com/eW3HvBpzNH

Anytime I see this picture on the TL, I get angry all over again 🤬
Why is Pastor Kumuyi not saying anything? pic.twitter.com/GYxubp5e6P

A boy is allegedly raped and all you care about is the fact that ‘they’ are trying to blackmail pastor kumuyi? Me I am not saying the woman is not lying, but shouldn’t we be more focused on finding out if that boy was raped or not?