Investigative journalist, Ruona J. Meyer, has accused Kiki Mordi of taking sole credit for 2019 BBC documentary, Sex For Grades and sidelining colleague, Oge Obi, who is allegedly the brain behind the project.

Sex for Grades was published by BBC Africa Eye in 2019 and the journalist who is the face of the creative work, Mordi, has since gotten numerous international awards and recognitions.

The 29-year-old then-BBC reporter through the documentary exposed the rot in some tertiary institutions in Nigeria and Ghana.

Read Also: SexForGrades: What Nigerians On Social Media Are Saying

However, Ruona J. Meyer has now taken to Twitter to claim that the documentary was not actually Kiki Mordi’s idea, but that of a lady named Oge Obi.

In a series of tweets on Thursday, Meyer alleged that Obi conceptualized, pitched, researched and co-produced the journalist work but that Mordi has failed to credit her or share whatever cash prize received for the documentary.

Meyer made the allegation few hours after International Centre for Journalists (ICFJ) announced that Mordi has been named as winner of 2020 Michael Elliott Award for African Storytelling.

Meyer called out Mordi, telling her to make sure she at least shares the prize money from the award with Obi and acknowledge her, saying;

Real journalists have honour and also hold themselves to account, not just the government.

Kiki, make sure this time you at least share whatever prize money there is with O.O and acknowledge her – given this was all her story as pitched, sourced/started.
Real journalists have honour and also hold themselves to account, not just the government. #TruthIsSacrosanct https://t.co/gvmQ42IeFo

The Emmy-award nominee went further saying Obi did not get a fair deal from the project but Mordi chose to remain complicit and also became a beneficiary of her silence.

She then went on to say there are facts, complaints, responses to support her claim as well as a Twitter thread by Obi made sometime in August, where she lamented about being sidelined.

O.O a fellow female journalist did not get a fair deal, and you remain complicit and a beneficiary of that.

The facts, complaints, responses and even her thread are there.

Better make it right because journalism can’t insist on ethics & fairness from others, yet cheat within.

Here are screenshots of Obi’s thread in August below; 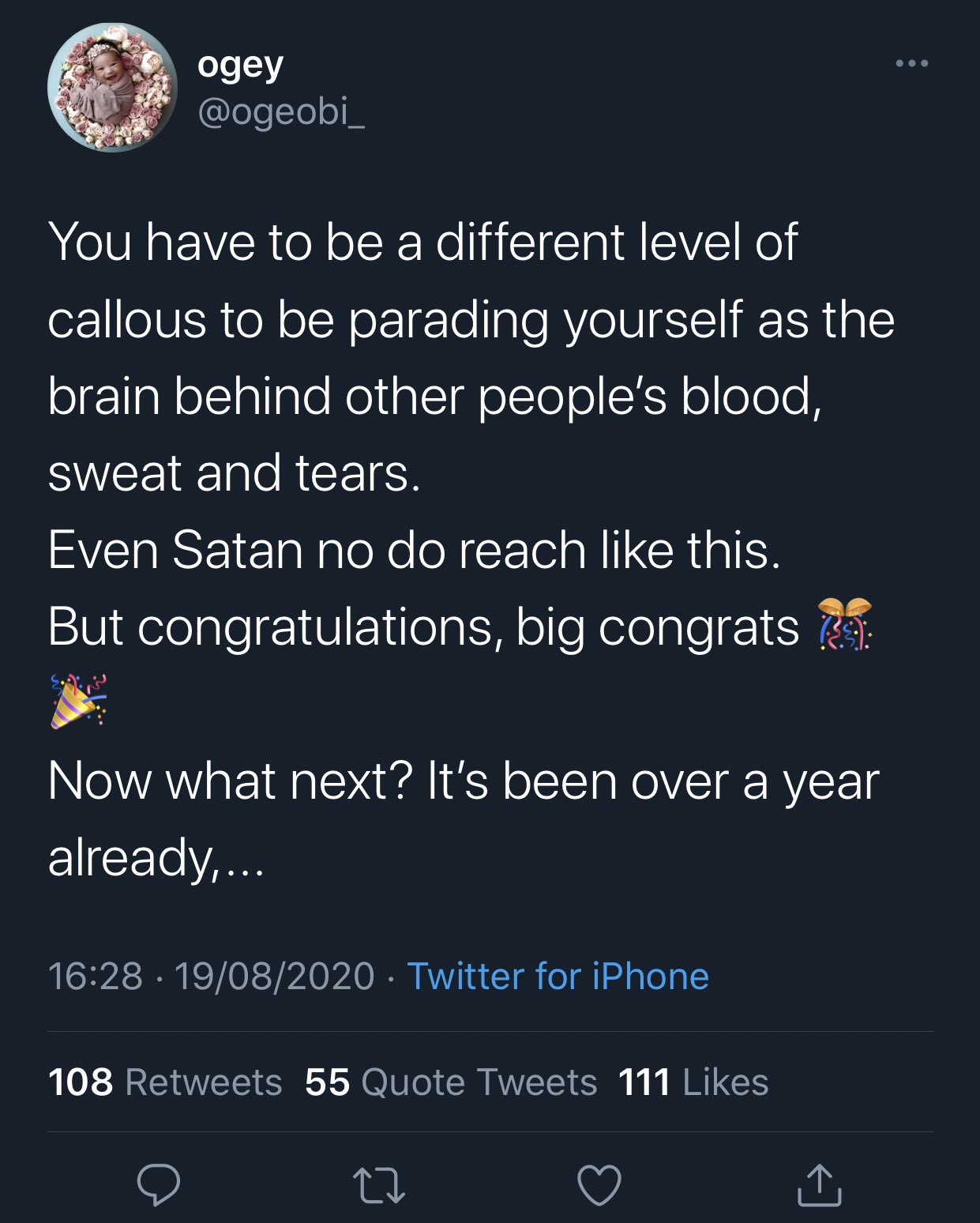 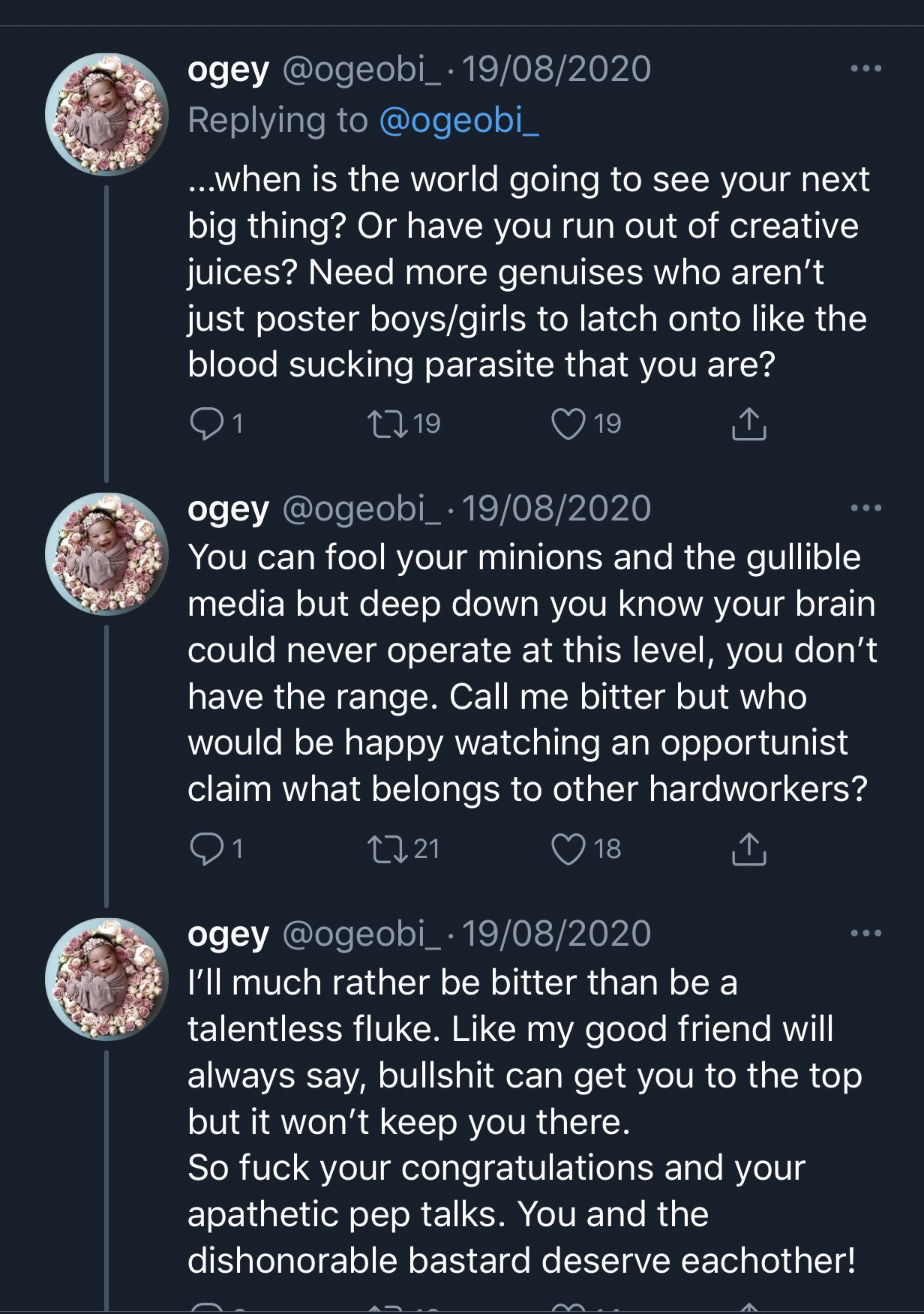 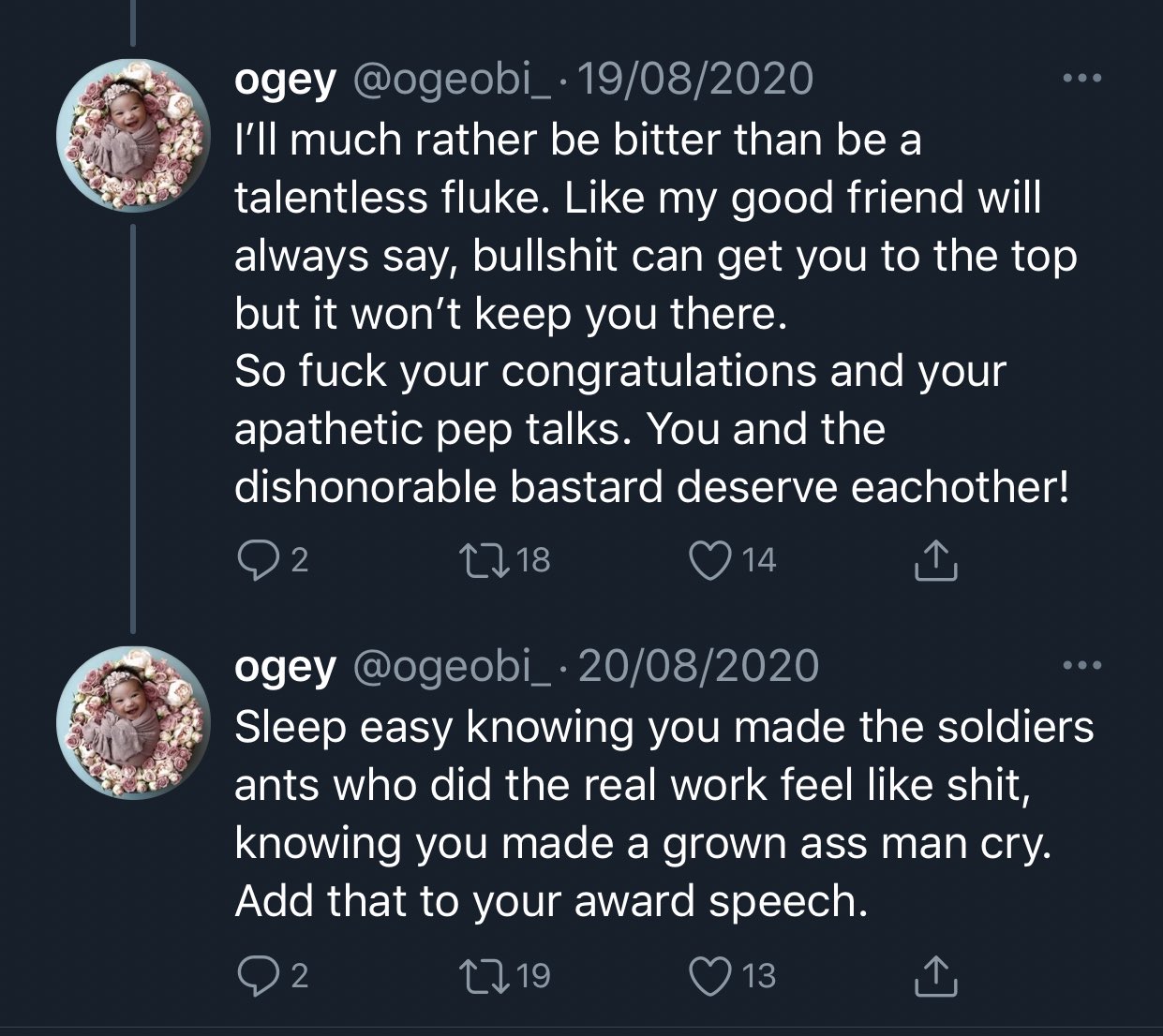 Meyer revealed that she was physically present when Oge Obi and another journalist pitched the story before it was approved.

For any bright sparks, I was in that newsroom when N.O and O.O pitched that story, so don’t try me today… I suggest you try Jesus instead. He is a better option.#RealJournosHaveHonour

He alleged that Kiki Mordi was simply hired to do a narration but when it gained international recognition, she refused to credit Obi or share the grants won with her.

Sex for Grades was conceptualized, pitched, researched and co-produced by Oge Obi.

Kiki Mordi was simply hired to do the TV narration part and somehow it blew. But that’s not a problem.

The problem is she’s winning international grants worth millions and refusing to share it. https://t.co/GfEdJftiwM

He emphasised that it was a team effort that some BBC foreign correspondents were also involved but Mordi began to hoard accolades and international prize money.

It was a team effort. Even some BBC foreign correspondents / journos were involved. Everybody was ok with it until Aunty Kiki decided to start hoarding the accolades and international prize money.

You can leave Benin, but Benin cannot leave you. https://t.co/GBsKihgNEl

The point of this particular tweet is that Ruona is a fisherwoman, if you chop her bait you’ll be taken for idiot. If you don’t, she’ll use the idiot that chopped her bait against you. It’s a sad life really. https://t.co/ECWHRAyD9p

Every new day I win an award, Ruona loses it. I will never understand what I did to this woman besides unfollowing her on Twitter😭

Insecurity: Buhari Fails To Appear Before House Of Reps