Amotekun Dismisses Officer, Hands Him Over To Police For Killing 23-Year-Old Man In Ibadan 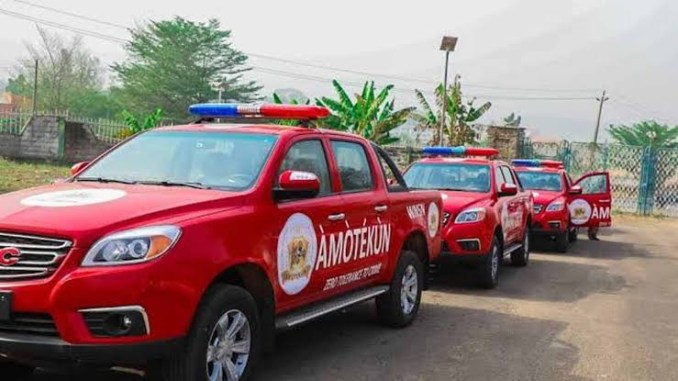 Oyo State chapter of Western Nigeria Security Network, better known as Amotekun, has on Thursday, said that it has dismissed an officer for allegedly killing a 23-year-old man, Tosin Thomas, in Ibadan.

According to reports, Thomas was shot dead on Wednesday by Afolabi at Makola area of Ibadan when the members of Amotekun were called to intervene in an armed robbery attack.

Reacting to this, the security outfit revealed that it has relieved Afolabi of his duties for acting contrary to the rules of engagement and handed him over to the police.

Commandant of Amotekun in Oyo State, Col. Olayinka Olayanju in a statement on Thursday, said investigation showed that Afolabi shot the victim against Amotekun’s protocol.

Olayanju added that the agency has its own internal mechanisms of dealing with erring staff.

At about 10 PM on Wednesday, January 13, 2021, Operatives of Amotekun, led by Team Leader George Idowu, got an alert of a purported armed robbery operation at Total Filling Station, Mokola, Ibadan.

Following the distress call, the Team Leader and his team of seven members, arrived at the scene.

On arrival at the scene of the alleged crime, it turned out that it was not an armed robbery operation, though a crowd had gathered.

The Team Leader, sensing no immediate danger to anyone at the scene immediately proceeded to speak with the station manager. While he was with the manager, he heard a gunshot.

As it turned out, one of his team members, by the name Afolabi Kazeem, who felt sufficiently threatened by the crowd, which included some hoodlums armed with cutlasses and other dangerous weapons, opened fire to supposedly scare away the crowd.

Unfortunately, his shot hit one Mr Tosin Thomas, 23, who was subsequently confirmed dead. The Corps has found that Afolabi Kazeem with Ammunition Number AM031849 acted outside the Amotekun Corps’ protocols.

For this reason, he has been summarily dismissed from the Corps and handed over to the police for prosecution. Also, his Team leader, George Mr. Idowu, is being thoroughly investigated and will face all necessary sanctions.

We want to reassure members of the public of our internal mechanisms for dealing with erring officers. We will continue to train and retrain our officers on best practices and rules of engagement. The Corps deeply regrets the loss to the Thomas family, and we are already in touch with the family.