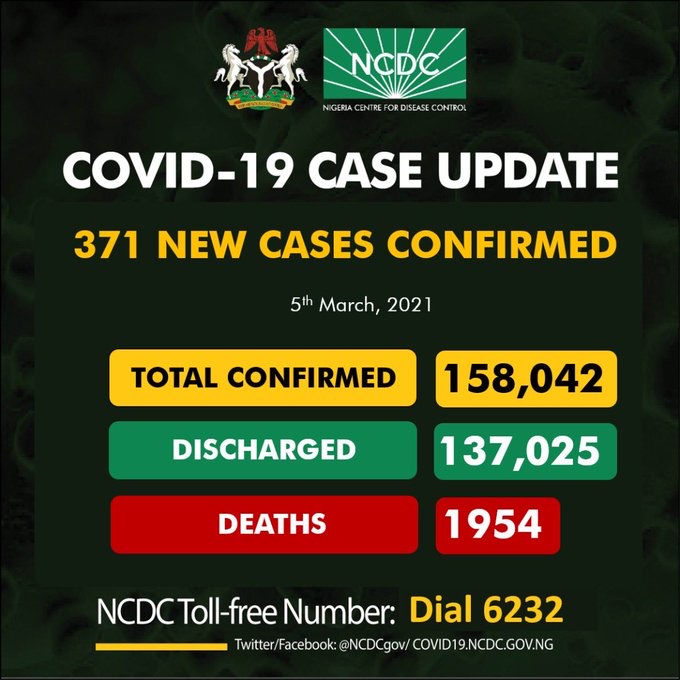 The new figure was a significant decrease from the 708 reported in the previous 24-hour cycle.

Nigeria suffered its worst phase of COVID-19 outbreak between December and January as daily infections averaged over 1,000.

However, infection figures have recently been relatively low with daily cases hovering between 300 and 700 in the past 13 days.

Thursday’s 709 was thus the highest in about two weeks but the 371 on Friday appeared a return to low daily figures.

Lagos state had the highest daily figure with 101 new infections to extend its lead as the most impacted city in Nigeria.

With the latest figure, the total infection tally in the country is now 158,042, according to the update published by NCDC on Friday night.

Also, the country recorded three deaths from COVID-19 as the country commences vaccination of its citizens.

The fatality toll in the country has relatively been high but Friday’s figure indicated a marginal decease from 12 deaths on Thursday.

With the latest figure, the total fatality toll in the country is now 1,954, according to the public health agency.

✅204 community recoveries in Kwara State, 167 in Lagos State, 88 in Edo State and 60 in Osun State managed in line with guidelines
✅Data from Kwara State recorded over the last two days

Health experts believe the official data under-reports both infections and deaths because of the country’s limited testing capacity.

Nigeria, Africa’s most populous nation, has so far conducted about 1.54 million COVID-19 tests, less than one per cent of the country’s 200 million population.

However, over 20,000 infections are still active in the country.

In the same vein, Cyprian Ngong, a medical doctor, on Friday, became the first person to receive a jab of Oxford-AstraZeneca vaccines in Nigeria. Three other health workers also received jabs during the flag-off event at the National Hospital in Abuja.

The country now hopes to vaccinate over half of its 200 million population in the next two years.