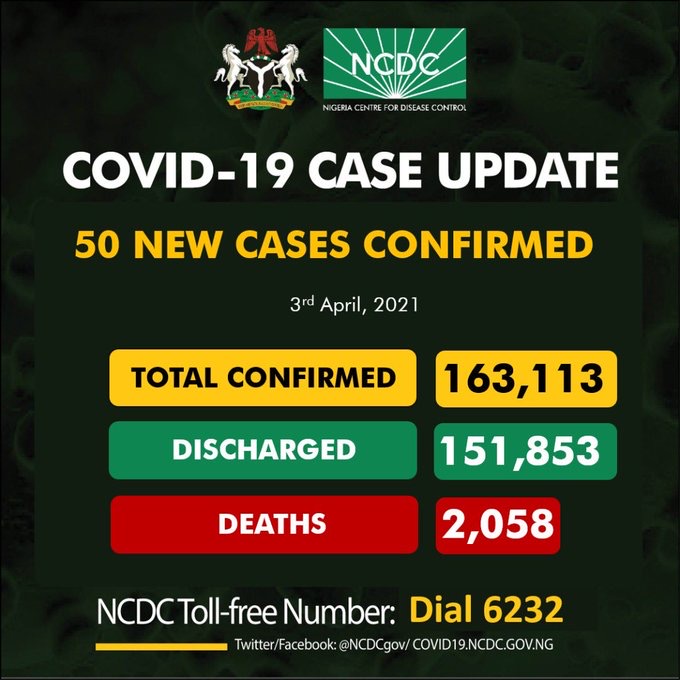 Daily deaths from COVID-19 have declined in Nigeria in the past two weeks with no fatalities recorded from the disease in the past 48 hours.

The fatality toll in the country remains 2,058 in total with no deaths from the disease on Saturday as it was a day earlier.

The new development is according to an update published by Nigeria Centre for Disease Control (NCDC) on Saturday night.

Lagos had the highest figure on Saturday with 27 new cases followed by Plateau and Bayelsa with 11 and 7 infections respectively.

Also, in continuation of a steady run of low infection figures, the country recorded 50 new cases in six states on Saturday.

The new tally raised the total number of infections in the West African nation to 163,113, according to NCDC’s data.

In the past one week, there has been a further decline in new cases as daily infections have fallen below 200.

During the worst phase of the pandemic in Nigeria, between December 2020 and February 2021, Nigeria recorded an average daily infection of over 1,000 cases.

NCDC’s data indicates that Africa’s most populous nation has gone past the worst phase of the pandemic although experts warns it might be too early to celebrate.

A breakdown of cases by state can be found via https://t.co/zQrpNeOfet pic.twitter.com/L9niwjf0vx

More than two-thirds of the over 163,000 people infected by COVID-19 in Nigeria have recovered after treatment.

According to NCDC’s data published on Sunday night, a total of 151,853 have recovered after treatment.

Meanwhile, about 10,000 infections are still active in the country.

Nigeria, about a month ago, commenced the vaccination of its citizens with Oxford/AstraZeneca vaccine it received almost four million doses of through COVAX facility, a UN backed arrangement.

Priority is being given to health workers while interested Nigerians have been asked to register online to be vaccinated.

The vaccines have been shared among the states according to the disease burden among the priority groups.

Nigerians React As Don Jazzy Reveals He Got Married At 20, Divorced After Two Years (Photos)