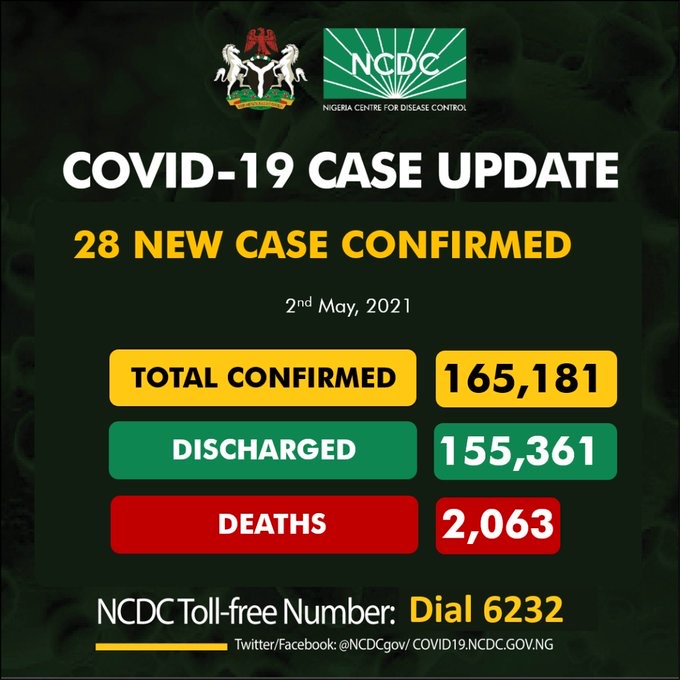 On the day Nigeria announced a travel ban on three countries experiencing a surge in COVID-19 cases, the country continued its trend of recording low infection and casualty figure from the virus.

There were no fatalities recorded from COVID-19 in Nigeria on Sunday as the country reported its lowest daily infection in several months.

Nigeria recorded 14 new cases on Sunday, an update by the Nigeria Centre for Disease Control (NCDC) shows, raising total number of infections in the country to 165,167.

According to the update, no new death was recorded from the virus which has already claimed 2,063 lives in the country.

This makes it the fourth consecutive day that nobody died from the disease in the country.

A breakdown of the latest data shows that 252 people were discharged on Sunday after testing negative for the virus, bringing the total number of discharged persons after treatment to 155,361.

Meanwhile, 7,743 infections are still active in the country, the infectious disease body said.

Since the pandemic broke out in Nigeria in February 2020, the country has carried out over 1.9 million tests.

A breakdown of cases by state can be found via: https://t.co/zQrpNeOfet pic.twitter.com/LOAYAsZRYp

Nigeria Will Not Separate, It’s Not Acceptable To Us – Tinubu

Monogamy Is Unrealistic, I Can’t Be Exclusive To One Person — Rapper, BlaqBonez (Video)