The electoral commission indefinitely suspended the bye-elections in Lagos, Bayelsa, Imo and Cross River among others indefinitely from October 31 owing to the violence that trailed the #EndSARS protests across the country.

In a statement released on Friday, November 13, Festus Okoye, the spokesperson of the electoral body, has now said the 15 bye-elections would hold across 11 states on December 5.

Okoye stated that the commission reviewed the situation of the country following vandalism of local government offices and facilities, which affected some areas where the bye elections are scheduled to hold.

He expressed that following consultations, the Commission decided to hold all the pending bye elections on Saturday, December 5.

The Commission appealed to voters and stakeholders in the States with pending bye-elections to continue to cooperate with the Commission to deliver credible elections under a safe environment.

The Independent National Electoral Commission (INEC) met today Friday, November 13, 2020 and among other things reviewed the outcome of its quarterly engagements and consultations with critical stakeholders in the electoral process, and further reviewed the security situation and other challenges regarding the 15 pending bye-elections in 11 States.

It will be recalled that the Commission met on 22nd October 2020 with Resident Electoral Commissioners (RECs) to deliberate on the said bye-elections earlier scheduled to hold on October 31, 2020 but postponed on account of the security situation and other environmental challenges in the country.

The Commission met again on Thursday, 5th November 2020 and reviewed the situation. It noted among other things the extensive damage to and vandalization of its local government offices and facilities, which affected some areas where the bye elections are scheduled to hold.

Consequently, the Commission decided to consult critical stakeholders in the electoral process before deciding on a definite date for the conduct of the bye-elections.

The Commission consulted with Political Parties and Civil Society Organizations on Tuesday 10th November 2020 and with the Media and the Inter-Agency Consultative Committee on Election Security (ICCES) on Wednesday 11th November 2020. Finally, it met with all Resident Electoral Commissioners on Thursday, 12th November 2020.

Based on these consultations, the Commission believes that security in the affected States has improved while the environmental challenges have reasonably abated. Consequently, the Commission has decided to hold all the pending bye elections on Saturday December 5, 2020.

The Commission acknowledges the support, understanding and cooperation of political parties, the security agencies, the media civil society organizations and the general public as it considers the scheduling of the bye-elections and in its overall efforts to reposition the electoral process and give meaning and value to the votes of the people.

We appeal to voters and stakeholders in the States with pending bye-elections to continue to cooperate with the Commission in its efforts to deliver credible elections under a safe environment. 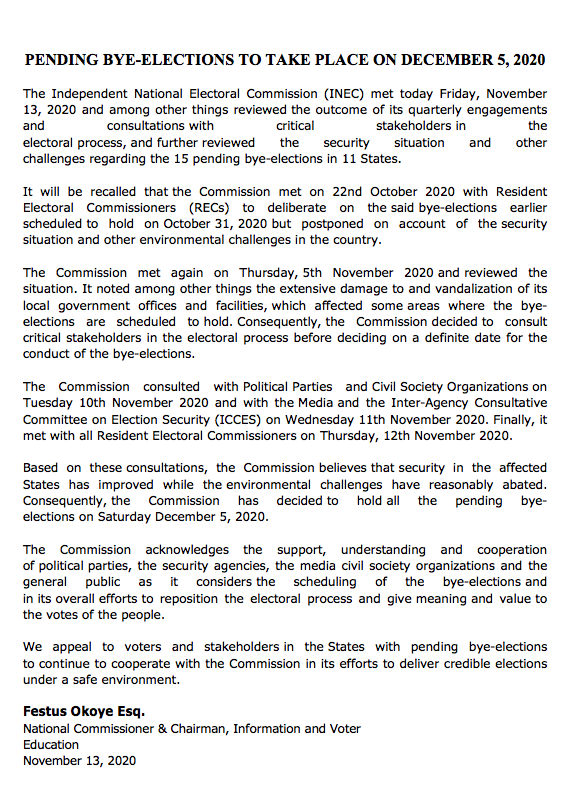