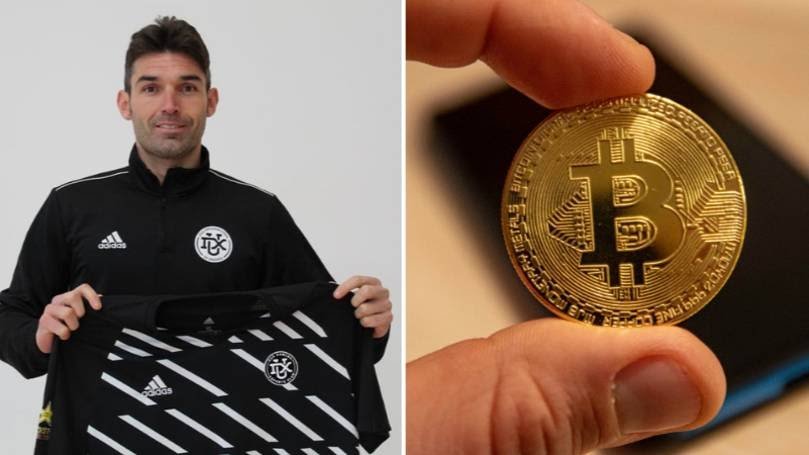 The 37-year-old officially signed for Segunda B side DUX Internacional de Madrid this week in a deal funded entirely through the use of bitcoin – the digital or virtual currency that uses peer-to-peer technology to facilitate instant payments.

The club, who are part of DUX Gaming – an eSports club owned by footballers Borja Iglesias and Thibaut Courtois, have not yet disclosed the total value of the deal, but the move for Barral was made possible by the Spanish club’s sponsor with Criptan, a local platform for the purchase and sales of cryptocurrencies.

In a post on social media, Internacional de Madrid welcomed the experienced footballer  while thanking their sponsor.

The club tweeted in Spanish;

David Barral new player of DUX Internacional de Madrid, welcome to the infinite club!. He becomes the first signing in history in cryptocurrencies. Thanks to Criptan, our new sponsor, for making it possible.

Barral, who made over 50 appearances for Real Madrid’s reserve side, also expressed his delight at his latest move.

Glad to join the project of @interdemadrid with eager ambition and responsibility to continue competing and achieve important challenges in my sports career.

Back in December, Carolina Panthers offensive tackle, Russell Okung became the first high-profile athlete in United States to be paid in bitcoin.

Okung, who will have exactly half of his NFL salary paid in the crypto-currency, has encouraged other professional sports stars to do the same.

In a statement, Okung said;

Money is more than currency; it’s power. The way money is handled from creation to dissemination is part of that power. Getting paid in bitcoin is the first step of opting out of the corrupt, manipulated economy we all inhabit.

What are your thoughts on bitcoin being introduced into football? Let us know in the comments.

Godwin Emefiele Under Fire For Describing Cryptocurrency As…

Tesla Buys $1.5B In Bitcoin, May Accept It As Payment For…