Queen Elizabeth II has on Saturday bid farewell to her late husband, Prince Philip, at a royal funeral like no other, restricted by coronavirus rules but reflecting his long life of military and public service.

The Duke of Edinburgh, who died on April 9 at 99, was interred in the Royal Vault at St George’s Chapel at Windsor Castle after a 50-minute service attended by just 30 guests.

The Queen, 94, seen for the first time since his death, was dressed in mourning black, with a white-trimmed, black face mask. Close family, also masked, sat socially distanced in the historic 15th-century Gothic chapel.

Philip — described by royals as “the grandfather of the nation” — was Britain’s longest-serving royal consort and was married to the Queen for 73 years.

He was an almost constant presence at her side during her record-breaking reign that began in 1952 as Britain rebuilt from World War II, and as its global empire began to unravel.

His death, which the family said had left a “huge void” in the Queen’s life, has robbed her of the man she called her “strength and stay” and closes a remarkable chapter for Britain’s most famous family, and in the country’s history.

The last high-profile funeral of a senior royal was for the Queen’s mother, who died in 2002, aged 101.

However, unlike then, when more than one million people thronged outside Westminster Abbey in central London to watch the sombre pageant, the public was noticeably absent from Saturday’s ceremony.

The coronavirus pandemic forced hasty revisions to the well-rehearsed plans for the duke’s death, code-named “Operation Forth Bridge”, stripping back public elements to prevent large crowds from gathering.

Government guidelines limited the number of mourners and a quartet performed hymns the duke chose himself in a barren nave stripped of seating.

The ceremonial funeral from behind the stately castle walls was broadcast live on television to millions across Britain and the world.

Beforehand, a military gun fired to signal a minute’s silence, when his coffin, draped in his standard and topped by a wreath of white roses and lilies from the Queen, his naval cap and ceremonial sword were borne by a bespoke Land Rover hearse he designed himself, arrived at the chapel.

Across Britain — on the streets, in shops, railway stations and at sporting events — people bowed their heads with respect.

Flights in and out of nearby Heathrow Airport were stopped for the duration of the ceremony.

Ieuan Jones, 37, travelled to Windsor from his home in the Welsh capital, Cardiff, and called Philip “a strong man, a true hero (who) did so much for this country and the royal family”.

Despite the restrictions, the stripped-down sendoff for the former Royal Navy commander still combined centuries of royal protocol with pomp, pageantry — and military precision.

Members of the British armed forces, in formal dress, lined the procession route, heads bowed, as the cortege passed, as a minute gun rang out across the grounds and a bell tolled.

Philip’s grandsons William, 38, and Harry, 36, joined the procession, in their first public meeting since a reported falling out about Harry’s shock move to California, and his stinging criticism of royal life, including racism in the family.

Harry had to quarantine when he arrived back in Britain for the first time since his move to the United States with his wife, Meghan, last year.

The pair, who as young boys walked behind the coffin of their mother, Princess Diana, in 1997, were separated by their cousin, Anne’s son Peter Phillips, 43.

The religious service was a simple affair, reflecting the wishes of the straight-talking duke, who was known for his aversion to “fuss”.

In keeping with his wishes, there was no sermon, but the service reflected his love of the sea, and long association with the Royal Navy, including hymns and Bible readings.

Meanwhile, Dean of Windsor, David Conner, paid tribute to his “kindness, humour and humanity”, and devotion to the Queen, who turns 95 next week and is in the twilight of her reign.

We have been inspired by his unwavering loyalty to our Queen, by his service to the nation and the Commonwealth, by his courage, fortitude and faith.

The Queen, who had been escorted to the chapel by a lady-in-waiting in the royal Bentley, watched from the chapel choir as her husband was lowered steadily into the Royal Vault by an electric motor. 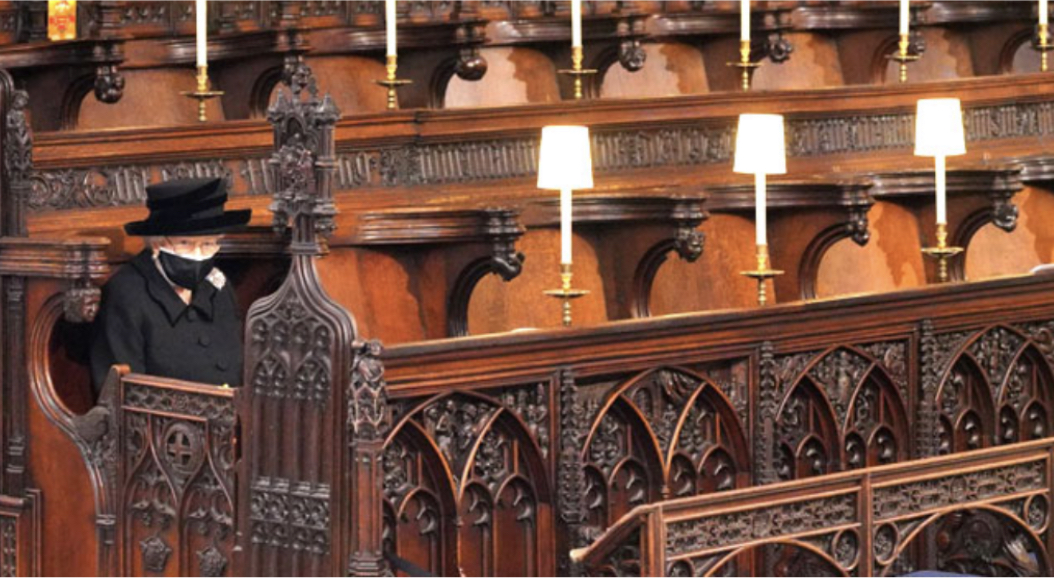 Pipe Major of the Royal Regiment of Scotland played a lament, and buglers of the Royal Marines sounded The Last Post.

When the Queen dies, he will be transferred to lie alongside her in the King George VI memorial chapel, which houses the remains of her father, George VI, her mother, also called Elizabeth, and the ashes of her younger sister, Margaret.

The funeral comes after eight days of public mourning for the duke, which has seen the Union Jack flag flown at half-mast and a virtual halt in official government business.

It has also brought renewed focus on the central place of the royals in British life and culture, with the ageing Queen and Prince Philip symbolic of another age.

“I love the royals. I think they’re amazing… It’s sad because, in time, all this will change,” the 57-year-old said

Pollsters YouGov in March found that while 63 per cent of the public supported the monarchy, only 37 per cent of those aged 18-24 wanted it to continue. Of them, 42 per cent said they would prefer an elected head of state.

Yet his death commanded a flood of tributes from across Britain and around the world, including from the remote Pacific island of Vanuatu, where he is revered as a god.

One of his lasting legacies will be Duke of Edinburgh’s Award (DofE) scheme for young people, which was set up in 1956 and now operates in more than 140 countries worldwide.

Some 6.7 million young people in the UK have taken part. His youngest son, Edward, Earl of Wessex, has assumed a greater role in the organisation, of which he is a trustee.

He will become Duke of Edinburgh when the Queen dies.

Prince Philip’s Cause Of Death Listed As ‘Old…

Queen Elizabeth II All Smiles As She Returns To Work For…