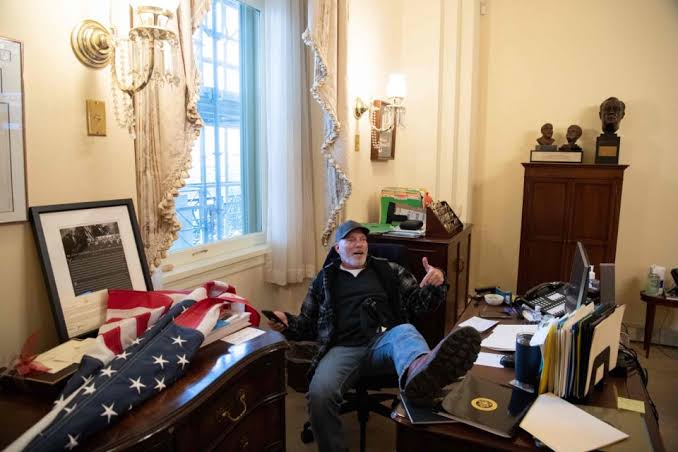 US Police have arrested a man who was photographed sitting at Speaker Nancy Pelosi‘s seat with his foot on her desk during Wednesday’s Capitol invasion, authorities said.

Richard Barnett, 60, is accused of entering and remaining on restricted grounds and is also charged with theft.

The self-employed contractor, nicknamed “Bigo” bragged on camera on Wednesday outside the Capitol about how he was escorted out, but not arrested.

Barnett is a Trump supporter and attended a “Stop the Steal” rally in Northwest Arkansas in November.

A New York Times reporter tweeted that he spoke with Barnett after his stunt in Pelosi’s office. In the video, he boasted about stealing a personalised envelope, but insisted he paid for it.

He said; “I left a quarter on her desk”.

That’s Richard “Bigo” Barnett, 60, from Gravette, Ak., showing off the personalized envelope he took from Speaker Pelosi’s office. He insisted he didn’t steal it — “I left a quarter on her desk.” pic.twitter.com/aST7MCoRwP

Barnett also claimed that he knocked politely on the door to the California Democrat’s office, but was then swept inside by other rioters who had breached the Capitol.

He is one of at least 26 people sought by the Police, which offered a reward of up to $1,000 for information that leads to their arrest and indictment.

Also charged Friday in connection with the rioting at the Capitol was a state lawmaker from West Virginia and Republican, Derrick Evans, who had recorded and then deleted a video of himself joining the crowd. A petition was started for him to step down.

We are far from done. The rioting and destruction we saw will not be tolerated by the FBI. We will continue to investigate all allegations of criminal activity.

Just because you’ve left the D.C. region, you can still expect a knock on the door if we find out that you were part of the criminal activity at the Capitol.

Authorities also announced charges for one Lonnie Coffman, of Falkville, Alabama on Friday. Federal prosecutors say Coffman had 11 Molotov cocktails (hand bombs) “ready to go” when he was arrested during the breach and riot at the Capitol on Wednesday.

Coffman was arrested on gun and ammunition charges sometime on Wednesday night after the insurrection inside the Capitol.

In a Department of Justice press conference on Friday, prosecutors revealed authorities responding to a separate report of possible pipe bombs found a pickup with Alabama number plates.

Inside were the 11 Molotov cocktails, an M4 carbine and two handguns. Coffman faces firearm charges and a charge of possession of a destructive device.

DOJ prosecutors on Friday said Coffman has already appeared in court, but his court file has not yet been unsealed.

Acting Attorney General Jeffrey Rosen expressed that the Justice Department would “spare no resources in holding accountable those responsible” for the murder of U.S. Capitol Police Officer Brian D. Sicknick. No arrests have been made in that specific incident.